Posted on June 4, 2010 by Taline Voskeritchian 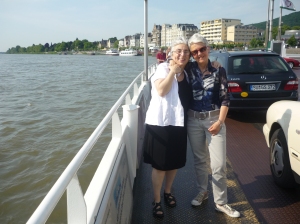 Lipstick girls on the Rhine,Koenigswinter, Germany

By our last count, after dinner last night here in Cologne, we–my dear friend A.B. and I– had enjoyed each other’s company in eleven different towns and cities, across three continents–the US, Europe, and the Middle East–and during more than three decades of friendship.  This is what we always do when we meet.  We sit and count the locales, one after another as though it were the first time we were doing this inventory.  “Do you remember,” we then tell each other.”Do your remember the time we…?” and invariably our memories and words take us back to that night–New Year’ Eve, actually–in Iowa City, Iowa, where we dived into the snow, rolled around for a while, singing at the top of our voices, and making absolute fools of ourselves in the quiet neighrborhood of university housing.  We had run out of acohol, and had volunteered to replenish our supply by running over to her apartment. We were not drunk, just being silly and loud and adolescent.

That was Iowa City in the late 1970s, where we had met a few years earlier on the bus and struck up a conversation about Arabic and about archeology in the Middle East.  We always remember that initial meeting, too and how improbable it now seems that we should have become friends and persisted for so long, and after so many passages and life experienes which could have thrown us assunder:  She, of Dutch origin, younger, working to earn a living, and I, a graduate student from the Middle East, mother of a newborn, and politically neither as astute as she was nor as involved and active.  But initial encounters are mysterious creatures, and such was ours.

Between that meeting on the bus and this one, here in Cologne, we have descended on Paris (twice); walked through the narrow passageway of the Nabatean town of Petra in Jordan;haggled with insistent sellers in Damascus; tried to be invisible to the stares of the locals in the Syrian town of Hama; consumed with relish the most delicious of foods in Aleppo and had our cups ‘read’ by an old famiy friend; walked by the Rhine, as we did again last night; and broken bread together (many times) in Los Angeles.  We have known each other’s joys and sorrows–divorce, death of a spouse, remarriage, illness, resettlement; we have lamented political change and decline; we have led several two-person little intifadas in our living rooms.  We have celebrated all manner of silliness; we have given advice to each other freely (sometimes unsolicited) about all things romantic; we have compared book authors, and lipstick brands, and fabric texture.

And as we did last night, we are still going strong.  “We should meet in St. Petersburg,” one of us tells the other. “That would be terrific!” comes the reply fast and furious. “There is one thing you must really, really learn,” she tells me. “How to ride a bike.” And I respond to her with a promise that I will–which I will for sure as soon as I return to Boston.

And despite all our differences and passages and disappointments and troubles and joys, despite the fact that I don’t understand one word of the German she speaks to her spouse and neighbors, and as improbable and free-flowing as our friendship has been, there is one thing we share with quiet pride:  Our short, cropped hair has turned a lovely white, and we have no intention of changing the color.  And this evening, we’ll put on the lipstick, and arm in arm go for a nice long walk down the Rhine, have Italian ice cream  (pistachio, for me; vanilla for her) in the shade of the cathedral bells tolling; and for sure we will again ask each other: “Do you remember that time, in Iowa City….”

The waters will gradually turn dark, the wind will sway us this way and that, but we–our chests to the elements, our hair unruly and sparkling, our words and and laughter abundant and effusive–will march on, our steps turning to a wobble, our joints beginning to ache.  We’ll march on, dear friend, until the end of the river and beyond, to other lands and cities, recollected and imagined.

Writing teacher at Boston University; translator (from Arabic and Armenian); prose writer; occasional editor; incurable wanderer.
View all posts by Taline Voskeritchian →
This entry was posted in Aging, well enough, Cities and towns, Letters and dispatches, Those we Love. Bookmark the permalink.