Posted on July 23, 2010 by Taline Voskeritchian

Before the Breaking Bread page moves to a regular category and is archived, I’ll run the two recipes once again for a festive table. First, the modest tabboulé made with an abundance of the the princely parsley. Tomorrow evening, mtabbal made with the glorious eggplant: 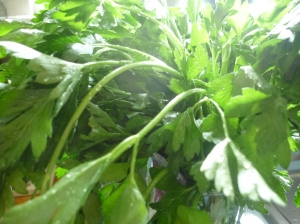 Is there anyone in this multicultural world of ours who has not heard of, consumed or tried to make a good tabboulé? (The pronunciation is important: A double “b” and an “eh” sound at the end and not “taboulee” which sounds like the name of the twin sister of Sara Lee.)

But a good tabboulé is not that easy to make, and I am living proof of this gastronomic truth. I have not had good “role models” (that word, again!) for a delicious, refreshing and wholesome dish of tabboulé. My mother and grandmother were not particularly good cooks, and their tabboulé was competent at best and barely passable at worst. Then, for decades of living with my spouse, I had to consume tabboulé which was too processed and messed with: Because he was on a low-sodium diet, Ohan would go for the aromatic effect: add pomegranate syrup or Aleppo red pepper and always, and without fail, lots of lemon juice.

Between these two extremes—of the lackluster and the saturated–my life with tabboulé unfolded quietly, below the radar screen. I longed for a tabboulé which could be assembled quickly, which would have a mild but memorable taste. Secretly, I collected hints; compared versions; took suggestions from friends willing to share their recipes. (Many held the secret of their tabboulé with a ferocity bordering on madness. I saw the searing zeal in their eyes, and the seething sense of possession behind their sweet words: “I don’t know follow recipes, dear. Just tell me when you want, and I can make some for you!”)

The stores were no help either, even the more fancy ones which have mushroomed in the last decade or two as food has traveled across continents, and–let’s face it–lost its native moorings and roots, its cultural and agricultural context. Most of the tabboulé that we find on these shores, in restaurants, is strong on the tomatoes and the bulgur (cracked wheat) and weak on the parsley. But that is only half the story because the dominance of tomatoes makes the whole thing a bit soggy, which it should not be.

Then, one day at the table of my sister-in-law, Nora, I had the best tabboulé I had ever had. I don’t remember when this was, but I do remember that she told me all her “secrets” casually and without much fuss. Like everything good in life, things were pretty simple with her tabboulé: Tabboulé should be eaten within hours of being prepared, and should never be left overnight in the fridge. It loses its color, its firmness and its taste. And to make the tabboulé “dry” the parsley has to be cleaned and dried, after which it had to be cut up fine but not too fine, and never subjected to the tortures of a food processor!

Green should dominate the entire mix, and the parsley should always and invariably be the Italian kind, not that scandalous curly kind which is made so by adding something toxic and viral to the poor herb. The parley leaves should be dark green of medium size. If you go for the large leaves, they tend to be coarse and difficult to cut.

Choose a couple of nice, ripe tomatoes, not too big but juicy enough. Cut them up into small pieces. Spread them out at the bottom of your serving bowl. Then sprinkle the dry bulgur (the smaller size, #1 is good) so that there is a balance between the two ingredients. Let the bulgur soak up the juices of the tomatoes for about half an hour. Meanwhile, remove the parsley leaves from their stem or you can do what I do. After washing the parsley thoroughly and discarding the bad stalks, reassemble it into a new, greener bunch, cut the bunch at the point where the thick stems begin. You’ll have some stems in your tabboulé but that’s perfectly fine. It gives the whole dish a gritty quality. With a sharp knife, cut up the parsley into small pieces, and little by little add to the tomato-bulgur mixture. At the last minute, add the salt, lemon juice (from fresh lemons) and high quality olive oil–and lots of it. Nora brings the lemon-olive oil mixture in a separate small bottle and mixes it in with the dry stuff at the very last minute, just before serving. I have copied this habit of hers. It shows a certain distinctive care and attention for that most humble and simple of all Middle Eastern dishes.

Of course, I have adapted and adjusted Nora’s tabboulé, integrating its main principles with those from other friends, and now I can say that I make a tabboulé by which I can be remembered long after I am gone. For we all want to be remembered, to leave a mark, to live vividly and for as long as possible in the memory of another or, if we’re lucky, of others.

Let it be said, therefore, of me, after I am gone, “She made great tabboulé! ” On my gravestone or in the hearts of those I have loved–makes no difference. Either is more than good enough for me!