French 1: The Joys of Rote

Posted on August 3, 2010 by Taline Voskeritchian 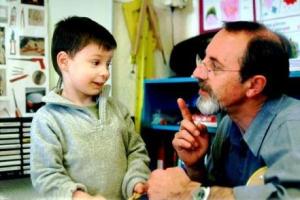 To Be and To Have

My friend C.M. is a poet, a translator, and a teacher.  He is also a very good cook whose offerings are as delectable as they are visually pleasurable.  He spends a lot of time preparing his dinners.  From the shopping to the arranging, from the choice of ingredients to the sequence of dishes, his table is generous without being excessive, tasteful without being hedonistic; above all, it is well-planned yet seems to have come about effortlessly, never drawing attention to itself.

For all his post-modern exterior, C. is an old-fashioned sort of person, and this quality is most visible (and audible) around the family table, when we gather for an evening of friendship and togetherness.  Sometimes, at the end of a great meal, C. has another offering.  He recites poetry, long poems  which he has committed to memory over weeks and months.  He has a particular fondness for W.B. Yeats.

It is an ancient talent, reciting poetry, and one which has all but disappeared from our life, and many of our classrooms.  In the name of infusing the classroom with creativity and “fun,”  we have turned our backs against all forms of learning by heart–from poems, to names of capitals of countries, to multiplication tables.  And we have done so at our peril, paying a heavy price in the weakening of our capacity for recall, for paying sustained attention, and perhaps most important, for slowing down, holding still, letting the words and the numbers and the strange names of cities and rivers do their magic on us, over and over again.

Which is what these first few weeks of learning the French verbs have brought home to me again. Slowly and methodically, I have repeated them hundreds of times, listening to the sounds of the words, making a correction here, an adjustment there as though I were taking them in, becoming familiar with them, finding a place for their meaning and usage–each one of them, in all its conjugations and moods and little quirks and caprices.

“There’s really no shortcut,” said my teacher at the beginning of our first formal class of instruction. And then he went on a detailed explanation (it was more of a meditation) on the musical metaphor of doing the scales, of paying attention, slowing down, listening to your breath, to the way the word sounds as it leaves your lips and enters the universe of conversation and meaning. The alliance between music-making and speech-making is a tricky one but one thing is clear:To begin with sound is to begin with matter, with the word as something concrete rather than as the tool of a grammatical rule, or the victim of an incomprehensible spelling shift.

I know, I know, the pragmatist will say that French is a killer language when it comes to spelling and pronunciation.  True, but I am learning that it is so also because it is one of those languages which has a very large and varied pallet of sounds (I am told Russian is the same) that can drive the novice learner crazy with exhaustion.  That’s where the loop of rote learning makes things easier–slowing down, repeating, paying attention, creating the porous conditions for the mystery of language to reveal itself, to take hold (in both senses of the word.)

Which is what always strikes me about C.’s end-of-dinner recitations. They are the coda of the evening, the final wrapping up of things after the dishes have been taken away, the music has died down, and we are all a bit tipsy in the afterglow of a superb night.  Like my wretched, wayward French verbs, the recitation (and what comes before it) is about attention, attention, attention–the gathering around a table, the cooking of a good meal, the effortlessness of it all.  It is always a matter of attention, and without attention all is sand and water slipping through one’s fingers.

Which  brings me back to rote learning.  It not only makes us remember the multiplication tables, poems, verb forms; it also sharpens our capacity for remembering. (There may be a reason why the word memory designates both the tool of memory-making and the end result.)  And for all the talk about the injuries of bloated memories, about the blessings of forgetfulness, a weakened memory is a shameful thing which can occasionally cripple us, make us lose our way, embarrass us.  (Sometimes, it’s cute when you talk about it afterward, but when you are in its grip, it is hell on earth, plain and simple.)

Conversely, an ability for recall is one of those things one can flash to the world, throw out as a challenge to an adversary, offer as support for a friend, or enjoy as an end in itself.  Which is another way of saying, Take out your Yeats, or your Homer, or your Darwish (who was a great reciter of his poems); if you are not that ambitious, start with the verbs of a language, any language, daunting and beautiful, difficult and alluring.

I realize I did not use the words hard work so far, and I will now: The hard work of paying attention, of hearing yourself in the act of entering the space of something new and exciting and difficult, of owning it and belonging to it–of making it all seem seamless, effortless, joyous.

Writing teacher at Boston University; translator (from Arabic and Armenian); prose writer; occasional editor; incurable wanderer.
View all posts by Taline Voskeritchian →
This entry was posted in Breaking Bread, Languages and readings, Learning, Teaching, Those we Love. Bookmark the permalink.