Posted on February 12, 2011 by Taline Voskeritchian

What is there to say about the events of the past three weeks?   What is there to utter in the wake of the collective voice of the millions as they wove through the streets of Egyptian cities, their power gaining in amplitude and clarity?  Yesterday, we all had to practice speechlessness in order to listen to Egypt speak.  And what speech it was!

As I have tried to understand the magnitude of this tectonic shift in the region, as I have tried to be equal (unsuccessfully) to its significance and consequence, I have also thanked my first teacher of Arabic–her name was Aida Shami–for instilling in me at a very early age the love of Arabic.  I have listened to the stiff, sometimes incoherent speeches of the regime, the impassioned urgings and astute analysis of the men and women gathered in Tahrir, young and old, professionals and laborers.  I have listened to their songs, their invocation of God, their jokes, and their limericks–improvised and potent, the solo followed by the recitation.  And I have been struck, once more, by the suppleness of Egyptian Arabic which they all speak, the precision and clarity of their analysis,  but most of all their torrential expressive energy and the depth of their articulateness .

Every mass uprising, every revolution brings with it the renewal of language, the encounter of old usages with new experiences, new realities, and from this encounter language is re-vitalized, made the portal of “thinking the unthinkable” (Zizek’s words). Every revolution pushes language to its extreme points, to the “chaos” of reversals and tearings and new cohabitations, to shattering and rebuilding.  Every revolution tries to liberate language from the hackneyed and the old and the pundit-dull.  In small and large ways, in the turn of a phrase, in the texts of posters, in the interviews and the speeches and the chants, language, too, was liberated, there in Tahrir.

(I am not a historian but I suspect it’s the same with all revolutions.  At least I know it to be so in the Karabagh demonstrations of February 1988 [and the ensuing speeches and foundational texts of the Armenian National Democratic Movement] which shook the Soviet Union and contributed to the eventual dissolution of the regime.  Language was “purified” of the dictates of officialdom, and re-cast as a tool of analysis, but also as an end in itself, the new usage its own reward.) 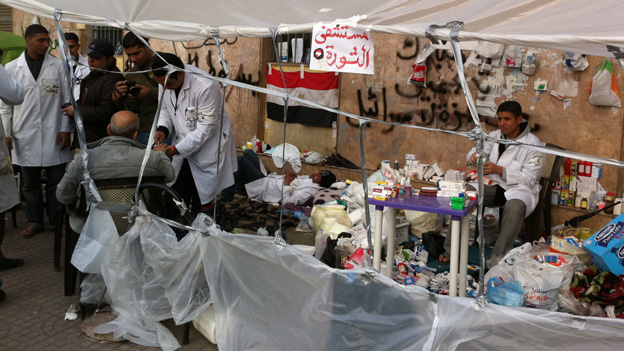 After Mubarak’s resignation, in that long moment of collective jubilation, a young man uttered a sentence in Arabic which I caught almost accidentally, which somehow brought the whole thing home for me:  Our future needs us, the young man said.  That was all. Our future needs us.

Today, I hear, the weather is beautiful in Egypt, and the sun is crisp and clear on Tahrir. Volunteers are cleaning the square, clearing the clinic and the kindergarten and the recycling area and the first aid station.  The pundits on our shores may debate until they croak whether Egypt is ready for democracy–their words vacuous, disingenuous, duplicitous, downright condescending at times.  But the world of the Egyptians and the region will never be same; it is new, as is its language.

Repeat after me and learn it: Tahrir.  The future needs us.