Posted on March 7, 2011 by Taline Voskeritchian

There’s a photograph of the poet Joseph Brodsky, on which I stumbled by pure accident some weeks ago, as I was trying to banish the afternoon blues from my day.  I had just finished Brodsky’s homage to Venice, Watermark, which for all its occasional meanness and its hefty doze of self-indulgence is a beautiful meditation about water in all its manifestations, including tears to which Brodsky devotes quite a few pages. (That Brodsky dares to write about tears in our age of on-demand tear-production is itself worthy of a second or third reading of this gem of a book).

Today, again under grey skies, I took a second look at the photograph (it’s on-line; you can find it easily)–really looked at it on this tiny, undiscriminating laptop screen of mine, which is oblivious to texture and shade and the play of light on the surface of things.  But even with these limitations, it is an arresting photograph in black and white of Brodsky and his wife, Maria Sozzani Brodsky. The setting is urban, with some sort of iron latticed background behind which lurk shades of grey.  I presume the photographer is Mikhail Baryshnikov, for so it says on the photo credit.  Even if I am wrong I want to believe that it is Barshnikov because the photograph, I think, is about a particular kind of movement–flight, perhaps, but certainly something out of the ordinary, something which holds the man and woman in its creased web for an instant before they disappear out of the frame.

The photographer seems to have caught that instant before his subjects desert it.  The Brodskys seem in a pedestrian mode, their attention directed to something outside the photograph; or it could be that they are simply engrossed in the act of walking, together, in a hurry.

She is in the foreground and closer to us, her profuse hair pinned up, her delicate face exposed to the elements and to our scrutiny, her eye mobile, her shoulders thrust forward on which rests his arm in a protective gesture, almost fraternal in its intent. Her profile is a kind of gateway to his, which is more sallow, more raw but also more expressive, holding in less.  Perhaps this is so because in his right hand he is holding his glasses (reading, I presume), a detail I did not notice the first time, but which seems so perfect a code for something self-contained, some sustaining quality which separates the two of them from the rest of their surroundings, from the photographer, and from us, the accidental viewers.  And yet for all its inwardness, the photograph shows two people in the grip of something larger than the man’s grip of her shoulder, something out of the picture’s frame to which the two seem directed, something transcendent perhaps or at least larger than their individual lives, something to which they have opened themselves, bared their chests, as it were, made themselves available.  And in doing so have made themselves visible to us.  We too are moved, a lump in our throat, the possibility of a tear at the edge of our vision.

You have opened worlds for me. That’s the highest homage a person can offer another person, that a traveler can offer the city he has grown to love beyond words and beyond many, many returns. Yes.  Brodsky’s last meditation on Venice is perhaps the most beautiful of all:  “The tear is an attempt to remain, to stay behind, to merge with the city. But that’s against the rules. The tear is a throwback, a tribute of the future to the past. Or else it is the result of subtracting the greater from the lesser: beauty from man.  The same goes for love, because one’s love, too, is greater than oneself.” 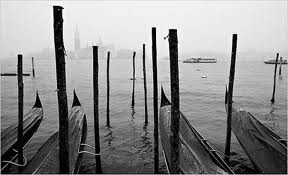