Posted on April 15, 2011 by Taline Voskeritchian

I am in Jersualem, finally.  The whole passage from Amman took us seven hours, from nine in the morning till almost four in the afternoon.  And in the midst of the long hours of waiting, I realize that I have forgotten in Boston some of the wiring for downloading photographs onto the blog.  So, I will make do with the standard photographs on the web, so help me God. 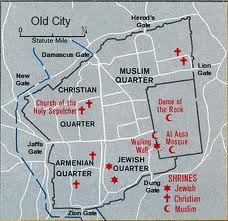 The route and its phases is pretty standard for those of us who have done this journey before.  We begin with a bus ride from Amman, the Jordanian capital, to the King Husseyn Bridge (formerly Allenby Bridge).  After the passport checks which can take several hours, another bus take us across the bridge to the Israeli side, and there the whole process begins again–passport checks, luggage checks, and in some cases questionings.  From there, it’s a short bus ride to the Old City of Jerusalem, which has changed significantly over the past decade and a half since I was last here.  But one thing has not changed, and that is the Jerusalem climate.  (And it’s climate, not weather).  On higher elevations, the air is so light, the wind so gentle, the sun so searing that you wonder if paradise was created here, on this spot. And as night falls, the air becomes a little colder, but only slightly; the trees begin to rustle; and the streets of the Old City dim, revealing the hurried pedestrians–figures coming out of the mist of the night. The vendors pack their kiosks and baskets, and the city gets ready for the night. 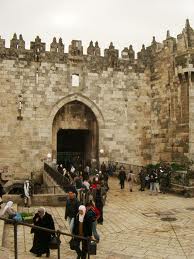 We enter the Old City through Damascus gate, whose middle is covered because of renovations.  The Damascus gate is one of the most dramatic scenes of Jerusalem, but today it looks like nothing of its old self.  We walk hurriedly through the mazes of the city to the African Community Center, crossing through a military checkpoint to stunning columned space which has the feel of a cave.  The opening event is full of animation; I run into a couple of old friends; telephone numbers are exchanged; the evening is alive though we’re all a bit tired.

After an eight minute musical interlude of Arabic singing on the oud, the first panel begins:  Authors Bidisha, Richard Price, Gary Younge, and Mohammad Hanif on the theme of “peaking with Many Voices: Writing for a Globalized Audience.”  It is a very interesting debate about language, the dominance (or seeming dominance of English), and the autonomy of literature.  The panelists make recommendations, mention their own books, their sense of being here, in this town, on this evening.  Two quotes stay in my mind:  Bidisha, speaking of the two or three languages which immigrants bring to the west, says,”They may have their facebook, but we have several languages.”  And Richard Price, non-practicing Jew who is on his first visit to Jerusalem says: “In the end, we write for those we love.  We also write for the characters that we create.”

It is a huge turnout which ends with everyybody hanging out for a while, and then off to a late dinner, complete with a terrific band and great food, including that delectable Palestinian lemonade with lots of crushed mint.  It is a wonderful atmosphere, and from our table we are delighted several times over by a gentleman from the other table who springs up to his feet every twenty minutes or so to dance to the music.  He is a great dancer, tall and elegant, but more than that there is something a bit emblematic about his presence.  He gets up and dances, despite all the difficulties, the checkpoint, the redrawing of the city’s very face.  Dance, you said? C’mon!