Posted on June 16, 2011 by Taline Voskeritchian

I thought when I sat down to write this post that it was going to be another Paris morning–the wild traffic outside, the mad rush of pedestrians, the  greying of the skies. But it did not happen that way.  Be forewarned.

This is how I began:  Forget the Eiffel Tower, and the Notre Dame, and the St. Michel walks.  Forget them all.  You know Rick Steve’s shows by heart; you watch the travel channel all the time.  So, avoid it all, if you can.  In the privacy of your home, in front of your television set, you can travel that way, with those interests in mind.

But when you’re a traveler in Paris, when it comes to Paris, the place to be is the street markets which spring up on specified days of the week and run until around noon.  These markets extend across several blocks, and sell everything from fish to scarves, sausages to housewares, cheeses to little knick knacks masquerading as antiques, broiled chicken to jewelry. Yes, at the Saxe, the beautiful display of scarves sits next to the fish kiosk, and the woman running the flower stand rubs shoulders with the North African immigrant selling pulls of vibrant colors.  Here, you will meet your Mother of all Temptations, and chances are, you will give in.  There are some things in life–the dark secret that you keep from the world and often from yourself– which are irresistable.

This morning, early, I paid my first visit to the Saxe.  I counted my euros, made a quick mental budget for myself and headed up the Invalides to the Breteuil Park.  I behaved, stuck to my budget, was utilitarian–until, that is, I stumbled on the olives stand and its blue-eyed charmer.  And there in front of my two eyes were a dozen or more kinds of olives–stuffed, seasoned, cured, sauced, black, multicolored, green. 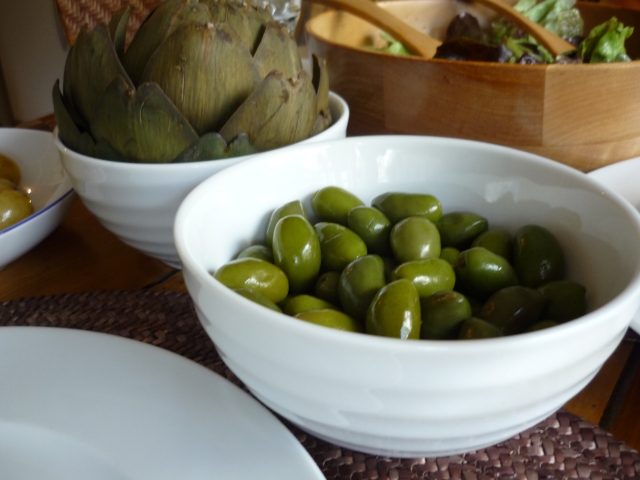 Many of these olives–at least in terms of their looks–are not new to me ambivalent as I am with messing around with anything to the point that its original feel and texture and taste is altered.  Sometimes I feel deeply sorry for olives, for the ways in which they have been messed up. Some weeks ago, in Boston, I tasted olives that were stuffed with almonds.  Give me a break! Leave the poor olives alone. Their fate has been similar to yogurt, that other great food staple from our parts of the world whose transit across the ocean has altered it beyond recognition.

And so when I did see the Lucca olives at the front of the plexiglass separation, sitting there with a few other seemingly unimpressive kinds, my heart skipped a beat.  I had tasted lucca olives some seven years ago in Paris, at a friend’s house, and I had spent the next seven years trying to find the same olives in Boston, but to no avail.  The Blue-eyed Charmer handed me an olive to try.  Yes, this was the olive of seven years ago.  Without much thought I bought some, not checking the price–which was, to put it mildly, quite high.  The Charmer wrapped the olives in a plastic bag, and off I went.  From then on, it was downhill all the way. I had broken my secret promise to myself, gone against my budget. For what?

For what?  For the most sublime taste in the world–unadulterated, un-messed up with olives.  Simple, tangy, a bit hard.  We set the table, sat down to our lunch, all the ingredients gathered together from the Saxe.  I bit into the olives slowly, one at a time.  It was great.  My straying-away from my plan was worth it.  Plans are for managers and bureaucrats, not for travelers and wayward types like me.  That was my justification.

This is where it was supposed to end, with some twist about olives being the salt of the earth, the mother of the most delicious oil in the world and so on and so forth.  But it did not happen. My story of the Lucca olives kind of gets stuck because just as I took the last of the 12 or so olives I consumed, the street began to rumble with the chants and noises and music and blasts and drum beats of the SNCF (railworkers) demonstrators. There walk went on for several hours, with wave after wave of demonstrators walking down our street, young and old, black and white, men and women.   In Slavoj Zizek’s phrase, it was a glimpse (but only a glimpse, sadly) of the “spirit of 68.” 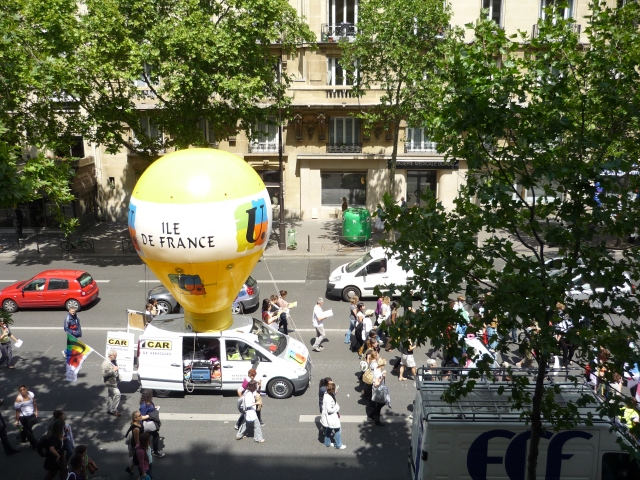 The two moments passed each other, dovetailing almost: the private pleasures of the Lucca olives and the pull of solidarity and collective action.  Cursed be he who has to make a choice, but if I were to choose, I know which way I’d go, despite all my words about the Lucca olives, all my joys for finding them again, here, in Paris, where the spirit of 68 makes appearances every once in a while, smack in the face of the disillusioned, and the cynics, and the indifferent.

It was a strange moment– it passed, its taste gone,  subverted, which another way of saying brought down to size, put in its place, its sphere.