At the Somerville Porchfest, May 19

If there was a conspiracy, it sure was a good one. The weather today in Boston was as close to perfect as we could hope for.  Days like this can be counted on one hand, but they may also be the reason why some of us stay in this region of the country despite the cold, the snow, the hot and humid summers.  Days like this when winter is making a quiet retreat and the ferocious heat of summer has not settled in. The city and all its extensions are bathed in clear, generous light; the wind is tender but present; the plants and trees are still moist from more than three days of rain.

The day is a slow celeberation of renewed life, and on a day like this where better to be than Somerville?  Its hills and descents, its narrow, one-way streets, its animated public spaces, but most of all its inhabitants who are scattered today all over the town for the yearly Porch Fest.  The whole town is out, and Summit Ave is one of the locations where Porch Fest is taking place.  There are others, but we are here, in this narrow, joyous space of music and togetherness.  It’s also where Little Rose–our friend, teacher, and our guide in the intricacies of muscle and bone, jazz and soul– and the Boston Allstars are playing and dancing and singing the afternoon away. But mostly playing, which this afternoon must be the passtime of the gods!

Rose and her people are the salt of the earth, the reason to come out to Somerville although we know, we foresee, getting lost in the maze of the streets.  But we soldier on until we hear the sweet music and the noise, find a place to park, and join the crowd.  The singing is sweet, the dancing is terrific, and the street is out in full force–the children selling lemonade, a young man in an orange shirt dancing with his son, and old couple swaying in the wind and the music–“Dance Me to The End of Love,” then “Nature Boy,” then “Ain’t She Sweet,”  and more, as the tap dancing intensifies, the audience joins in with arms stretched up.

Afternoons like this are fun–and that’s not a word I use often, but here, in this context, it is the only word worth mentioning: our senses alive, our arms entwined, and our bodies moving.  And if that’s not possible, then simply being there, in the presence of this paradise weather, on this street bursting with spring energy.

Oh sweet, spontaneous earth, wrote e.e. cummings.  He was a resident of Cambridge, but I have a suspicion that he was a secret lover of Somerville, of its vernacular beauty of many colors and languages, shades and light, paths and dead ends! 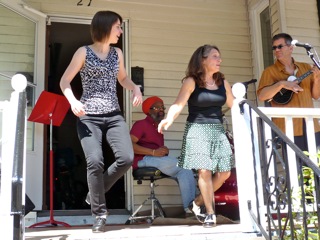 And what better way to say goodbye to this quirky, zany afternoon than with a mural we happened upon as we were driving away, the buzz still in our ears, the lift still in our toes! 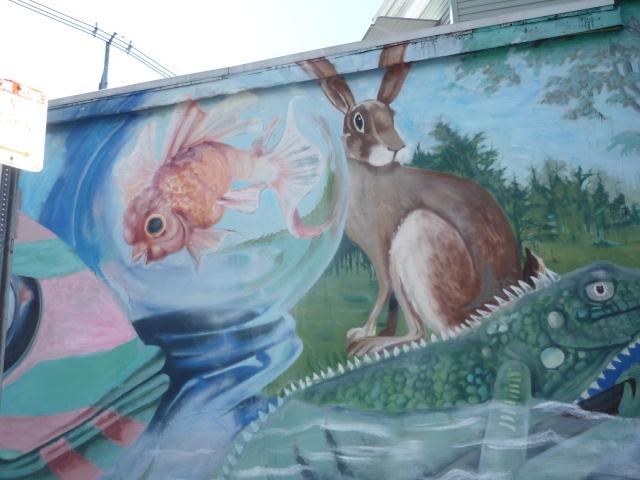 2 Responses to At the Somerville Porchfest, May 19