The Cinema of Sergei Parajanov by James Steffen

Posted on November 24, 2013 by Taline Voskeritchian 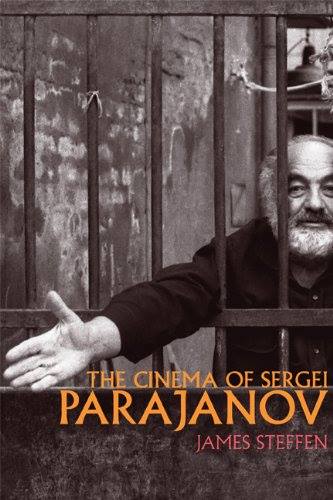 ~~Sergei Paradjanov was one of the most original film-makers of Soviet cinema. He was also one of the most vulnerable to ideological assaults that tried to interpret his illusive, highly stylized body of work to fit a certain agenda. These efforts were the domain of both his censors and his admirers, those who sent him to jail and hard labor and those in the West who championed his freedom but also used his work for all sorts of anti-Soviet, nationalistic aims.  One critic even called him a “secret Armenian” which, in hindsight is a laughable designation for an artist who was so profoundly transnational, and who drew from the many cultures and sub-cultures of the Soviet Union.  Of course, Paradjanov himself was also implicated, if not complicit, in some of these attempts, and enjoyed the full attention of those who wanted to save him from the clutches of the Soviet system.

The newly published study of Paradjanov, The Cinema of Sergei Parajanov (Wisconsin Film Studies) is by James Steffen, a friend, colleague, and fellow traveler to Armenia in the 1990s.  It is the first comprehensive study of Paradjanov’s complex, at times opaque, work in English.  It is, of course, much more than that for Steffen has consulted a range of sources–from official archives, to studies in French, Russian, Georgian, and Armenian to individuals who worked with Paradjanov or knew him well, in an attempt to give analytical coherence not only to the films but also to the maze of secondary sources.  All this will finally do justice to Paradjanov, and pave the way to emancipating his work from the clutches of narrow interpretations of the Soviets and their adversaries.  ~~