Reprise: The attack of the snatchers

Posted on November 29, 2013 by Taline Voskeritchian

~~It’s that day again–Black Friday.  And I am home, of course. Yesterday, over Thanksgiving dinner with friends, we started a silly little game of mentioning the things we would wait in line for, even scantily clothed and in the cold of winter.  Some of our items were too silly to mention; others verged on the vulgar; others still were too serious, like world peace and such drivel.  But there was one we agreed on, all three of us:  Marcello Mastroianni, until we remembered he was dead and gone.  That was the extent of our celebration of the collective orgy of Black Friday.

In 2010, I posted the following writing on the Black Friday of that year.  Some things don’t change much.  We’re still at it, pathology notwithstanding.~~

This year, Black Friday was here before today. In fact, it arrived, I am told, yesterday, even before the carving of the turkey and our collective frenzy to stuff ourselves silly with food.  Not that I am complaining–about the stuffing of ourselves.  I had a grand old time at home, with a group of friends and my one Boston-based blood relative–my dear niece A.  I even baked a turkey, complete with fresh herbs and lots of butter.  I have grown too old to fight that one, as I did for many years, getting myself invited to relatives’ and friends’ homes for the feast instead of making an earnest effort (like the good immigrant that I should have) of buying the beast, and baking it. This year, I went for enjoyment of it–modest, sweet.  The verb enjoy has no equivalent in the other languages of those who were gathered at the table last evening–in Arabic and Armenian and Hebrew and, let’s not forget, yes, French.  Still, we had a grand old time despite the specter of the lines which had begun to form by early afternoon at my local Best Buys, and other establishments of such ilk, despite the fact that we are all a bit melancholic by temperament.

Today, I gather, things are in full swing, as a couple of friends informed me this morning. It’s an event, this strange phenomenon of going after the bargains, of inaugurating the “shopping season” which, for me, is one long nightmare of large crowds but also large shopping carts; isles that seem to lead me to dark holes where ominous looking gadgets stare me down, like that spooky scene from The Great Gatsby; of racks and racks of turtle necks and flannel pajamas and gaudy colored underwear.  Of course, I could shop on-line where the enjoyment is more private (and borders on the onanistic, I suspect), but it is the enjoyment, this kind of enjoyment, which boils and curdles my blood. 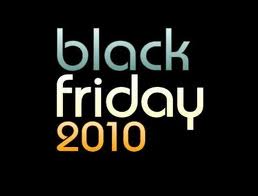 What is it that drives people to such extreme forms of behavior, as camping out all night for the opening of the stores the next day at dawn?  “It’s the bargains,” someone suggests. “You get a good deal.”  Getting out of bed at 3:00 am (even before the birds start chirping) is a bargain?  No, it must be something else, something deep and perverse and dangerous–which it is, I think though who am I to pass judgment?  (And on some occasions, in moments of deep darkness, I too have gone out to shop, bringing back a pair of shoes, a couple of silk flowers or a living plant or two, a book or a CD.)

Shopping is the drug of two faces, the great stimulator and pacifier rolled into one, and it is more so it seems in economic hard times when the world looks so dreary and drab and bereft of job opportunity and stability that one would be a fool not to miss this great occasion to go out and spend some money, buy something one does not need at all, just for the fun of it, just for the hell of it.  For what is enjoyment if not throwing dollars for something utterly unnecessary, utterly devoid of beauty and meaning, utterly superfluous, especially if one had so much, and more?  Shopping is the great–and very short lived act–of resistance to the deluge of pink slips and of hunger of the stomach and the heart that come in their wake.  It’s the drug which will not let go, for as soon as the the initial delight fades away (as it invariably will), one needs more and more.  Like obsession, shopping is the end of the road, the place where the whirl turns on itself, where beginning and end meet in a fatal but ever-regenerative embrace. 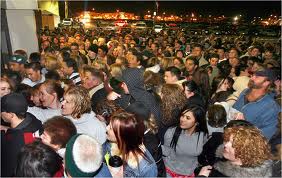 Don’t get me wrong.  I am speaking through blue blood, as a snob, if you will, as one has made a vow never to throw herself into the throes of this spectral dance again.  I’ve caught myself in this mess a couple of times though things were certainly not this bad when I ventured one day to Filene’s Basement in downtown Boston, around 4:00 p.m. on Christmas Eve many years ago; I was looking for a gift for a nine-year old girl.  The scene which revealed itself to me was one of utter chaos of near-empty shelves save for a few violated packages, with wires and doll hair sticking out of them; desperate shoppers clinging on to the last remaining toys; cashiers who exhausted their eyes seemed glazed and inert.  It was a scene of utter devastation, as though a hurricane had come and gone. It was a revolting sight.

I have also found myself also on the receiving end, so to speak, of such horrors–children and adults madly tearing packages open, their mouths salivating, their hearts in their moist palms, their eyes falling out of their sockets.  The scene has lasted only a minute or two, and then the crash, the hunger again for more, for something different, the receivers of the gifts figurines in the avalanche of torn, colorful paper, ribbons and boxes.

It won’t do, at least for me, to say,  ”I know all of it to be awful, but I still do it, knowingly.”  That won’t do, this kind of complicity which masquerades itself as good will, as a pre-deposition to go with the flow when the flow is not a flow but a violent, macabre web into whose threads one falls knowingly, willingly, where the bargain is not so much getting something for less but bargain in the Faustian sense of the word.

And if, as I suspect it to be so, the attack of the Black Friday snatchers is another hunger, for a sense of community and togetherness when the only real solidarity is the one which seems to have escaped our collective radar screens her on these shores, then spare me this variant.  I’d rather be alone, or, as a dear friend says, I’d rather be left alone, with less than I can have but good enough for a joyous gathering around the kitchen table, without the food processors and the microwaves and the parsley choppers and the electric can openers, not to mention the artisan bread and the organically-organic-and-beyond vegetables and the ever-more-exotic vinegars and oils and herbs. Spared all that clouds the radiance of our presence for each other; spared  all the rhetoric of coexistence and harmony and serenity.

Give me this: togetherness, with all its inherent conflicts and tensions but also moments of deep communion (yes, that word!) and silliness over this or another occasion. Makes no difference. I am not picky, low-maintenance in fact. Cheap is a better description.  This: for all its meaning and love. This: or nothing else, which means in the end that there are two ways of dying (at my age, death comes up often) alone or with one’s comrades, fighting the good fight which seems as remote a possibility this Friday as ever.

1 Response to Reprise: The attack of the snatchers