Posted on December 9, 2013 by Taline Voskeritchian 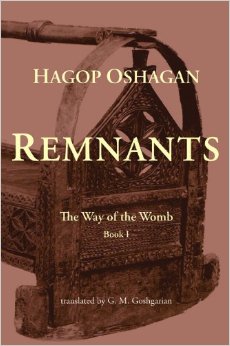 Gomidas Institute has announced the publication of a section from Hagop Oshagan’s novel, Մնացորդաց (Remnants).  The translation is by G.M.Goshgarian who won a PEN Translation Award for his work while it was still in manuscript form. The volume has an introduction by Professor Nanor Kebranian of Columbia University, an Oshagan specialist who is finishing up a book on the author’s prison novels.

The publication is a major literary event. This is the first translation of a book-length section of Oshagan’s unfinished 1800-page novel, his  magnum opus, written between 1928 and 1934 in Cyprus.  It is the culmination of a series of powerful novels whose theme is Muslim-Christian, and especially Turkish-Armenian, relations in the Ottoman Empire. Mnatsortats is a literary reconstruction of the pre-genocide world of the Armenians told through the collapse of a family, the Nalbandians. Oshagan intended  the novel to include three parts (Part I: The Way of the Womb; Part II: The Way of Blood; Part III: Hell) but was unable to write the third part, which was to be devoted to the extermination of the Armenians, depicting the twenty-four hours during which the Armenian population of Bursa was annihilated.

In Remnants, Goshgarian has successfully (and magnificently) rendered what he calls the “barbaric beauty” of Oshagan’s prose.  This translation makes part of Oshagan’s important work available to Anglophone readers for the first time.  Readers of world literature, historians of the Ottoman Empire, comparative literature scholars, specialists in anthropology, sociology, and women’s studies, as well as translators and translation theorists will all find in Oshagan new material for research, analysis, and readerly enjoyment.  Remnants re-constructs a lost world and does so by illuminating all the facets–political, social, sexual, religious, quotidian–of that world, to the most minute detail.

As some of the readers of his blog know, Oshagan is also my maternal grandfather about whom I have written before on this site.  This is why the publication of Remnants has personal significance for me, and I’ve taken the liberty of sharing it with you. I hope you will read Remnants. You will, I think, be swept away by its torrential energy and tumultuous content.~~

3 Responses to Oshagan in English…