Hagop Oshagan: Teacher for the generations

Posted on March 10, 2014 by Taline Voskeritchian 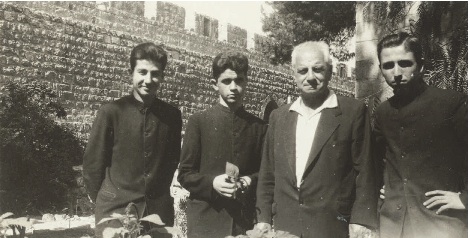 ~~This photograph is of the Western Armenian novelist Hagop Oshagan with his students, in Jerusalem. The year is unknown. It is one of the very few pictures of Oshagan with his students although it is said that  with them, Oshagan was very generous with his time and knowledge of literature. To his left is Boghos Snabian, the tireless editor of his books, and perhaps one of the few remaining persons who knew Oshagan directly.

Oshagan belongs to the post-Genocide generation of Armenian men (and some women) of letters who thought of teaching as a national duty, and learning as the new “home” of the refugees and survivors. Numerous essays and testimonies by former students paint a picture of Oshagan as an memorable teacher and a remarkable presence in the classroom–charismatic, engaging, erudite, but also acerbic and unabashed in his comments to his students about the quality of their work.

Oshagan began teaching in 1902 at the age of 19, in the elementary school of his native village. His last teaching post was in Jerusalem at the Armenian Theological Seminary (Jarankavorats) where he had moved in 1934 with his family. In the intervening three decades, he also taught at Armenian educational institutions in Constantinople, Cairo, and Cyprus.

He was, by all accounts, a legend in the classroom–fiercely demanding, insistent on passion and intelligence in equal parts, and brutally honest. It seems that no one who entered his classroom came out unscathed, changed, and marked for life. The same is true of the impact his novels have had on their readers. As Vahé Oshagan has said in conversation, “You enter Hagop Oshagan’s world at your own peril. When you finally come out of his world, you are a different person.”~~