On Vahé Oshagan: Between Acts…

Posted on October 26, 2016 by Taline Voskeritchian 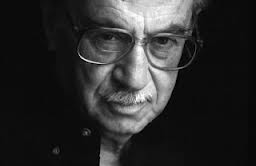 ~~Over the past two years, I have been working with the film-maker Hrayr Anmahouni on an innovative film about the poetry and life of Vahé Oshagan.  The film is titled Vahé Oshagan:Between Acts, and it is the most recent version of several re-workings that span over twenty years of footage.  The film is entirely in Western Armenian. I was tasked with providing the English subtitles, but because the film includes long extracts from Oshagan’s poetry, my charge was also that of a literary translator.

In several other ways, Vahé Oshagan: Between Acts is a groundbreaking cultural product in the Armenian world: a film grounded in Western Armenian about an Armenian writer, which walks a fine line between documentary and art film. I’d like to think of it as a wholly and unabashedly Armenian diaspora film.

The film has had two recent screenings in Yerevan, to enthusiastic response: at the American University of Armenia’s Manoogian Hall, and at the Mirzoyan Library which is one of the hidden jewels of Yerevan.

Roubina Margossian, indomitable reporter at Civilnet, conduced an interview with Anmahouni and me on the occasion of the film’s Yerevan screening.  Here is the link:

There will be other screenings of this pioneering film in the Armenian world, and certainly, beyond. ~~