Posted on February 21, 2017 by Taline Voskeritchian

Dale limosna, mujer, que no hay en la vida nada como la pena de ser ciego en Granada. (Give him alms, woman, because there is nothing worse in life than to be  blind in Granada). Francisco Alarcón de Icaza

My friend Aukjen sent me the translation of Alarcon’s lines this morning, as Granada’s weather was by turns sunny and drizzly, the sky a searing blue and then a dull grey. Alarcon is speaking, she said, on behalf of the blind one.  For him or her, nothing could be more cruel that Granada.

In fact, before I received the English translation of Alarcon’s words, yesterday, at the Alhambra, I thought my eye lids would simply close after so much pleasure, after so much saturation of visual sensation.  But they did not, for hours and hours of focused work, though palaces and gardens, fortes and baths.

Ahambra, for all its beauty, is work–the kind of work one associates with reading because Arabic-language Alhambra is a glorified reading, of rooms opening onto rooms of Q’uranic verses etched in stone and tile, on wall and ceiling.  Its strange combination of majesty and simplicity takes your breath away, holds you in your tracks, makes you wander if you are worthy (if anyone is worthy) of this much pleasure–pure.

Perhaps, as our landlord said, this is why “everyone thinks of Granada as home.”  Be careful, he added, that you don’t get too attached to Granada.  As I write these words, from a hole-in-the-wall internet store run by Morroccons, outside a group of Flamenco singer and dancers are singing and clapping, and I think it is not only blindness that would be the curse of Granada but also deafness.  So, with the fewest of words, I finish this little post and go out toward the source of the music.

Around every corner, there lurks a deep, sublime madness–of the gods.  And so, you take your soul into your hand, and walk into the alleyway. 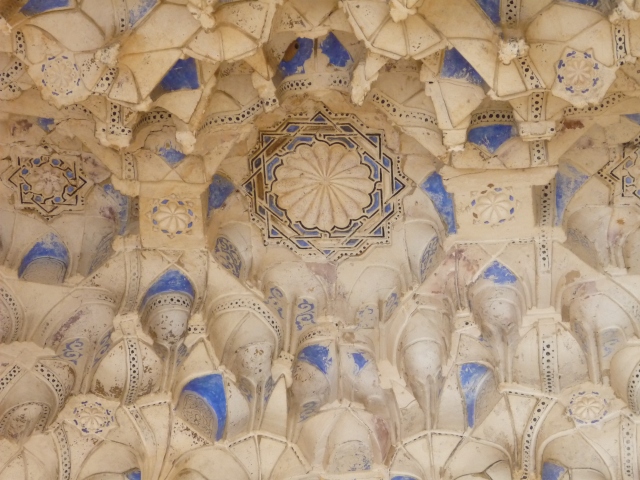 4 Responses to From the archives–Travel: Spain