Posted on March 5, 2017 by Taline Voskeritchian

~~ This essay was originally on June 4, 2011, shortly after we had visited Sacromonte inAndalusia.  It was later published on the blog of the radio program “On Being.”  ~~

The Trail to Sacromonte 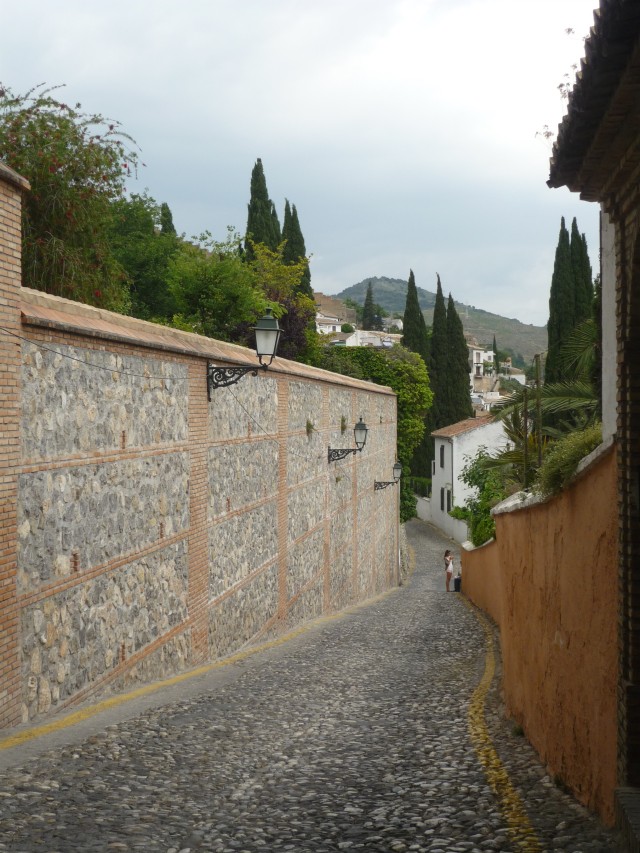 The road may be—and almost always is—made of our footsteps, but there are places in the world, sacred sites, where arrival is at least equal to the effort of getting there, where our beginnings and our ends do actually know each other.  The Camino Sacromonte which we climbed yesterday all the way to the Abbaye du Sacromonte at the very top of the trail, the rain and mist our only companions, is such a place. 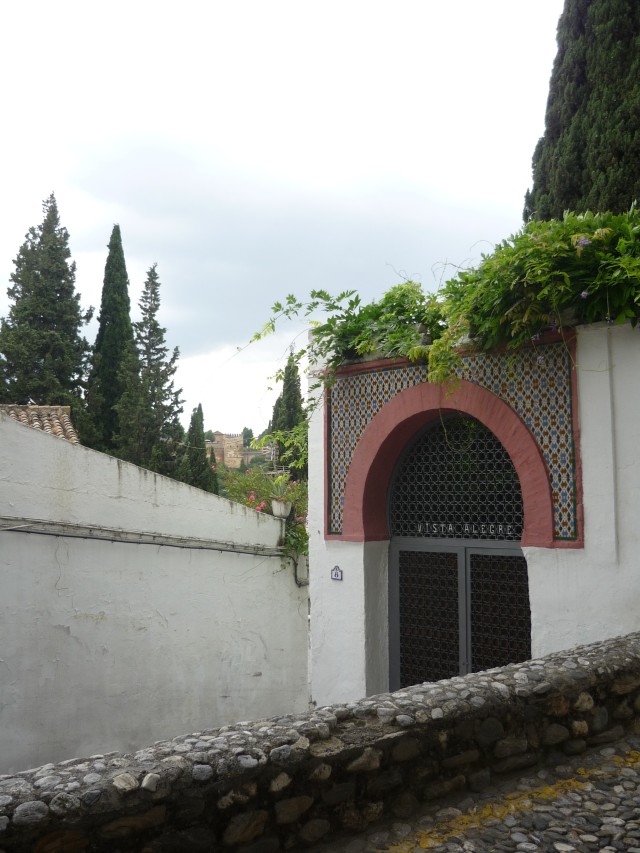 We had begun rather unambitiously, meandering up and down through the alleyways of Albaicin, until we suddenly found ourselves on the Sacromonte trail.  On one side was the lush landscape atop which sat the Alhambra, on the other side, and at a sharp elevation we could make out the Abbaye du Sacromonte.  It was a grey afternoon.  We walked slowly and quietly, for there was not a much sound around us save for a few tourists and locals, and the dogs of which there are an unusually large number in Albaicin. We stopped here and there, the landscape taking our breath away–literally.  And then on a little bit more, and then another stop. 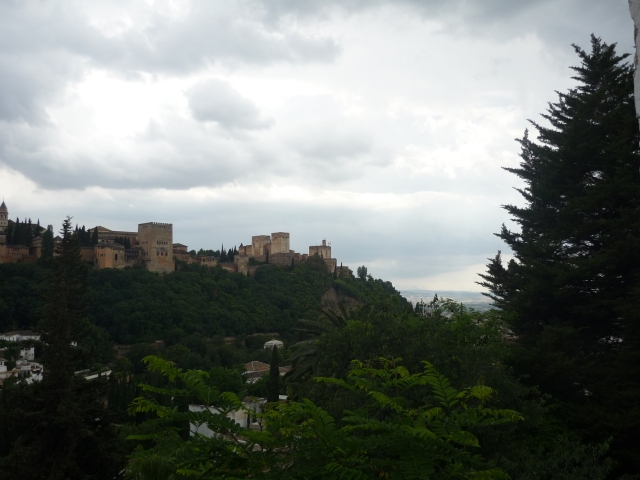 Then, it began to rain—first softly for a while, the droplets of whispers.  The rain stayed with us all the way to the top, sometimes a mere hint, at other times a downpour.  We continued walking for a long, long time, and then the rain became more ferocious as we made our way up the arch of the abbey.  The path became more treacherous, but we persisted, stopping to catch our breath and then start again.  For more than ten minutes, we ascended, our feet muddied, our hearts beating fast, our ears alert to the tiniest movement.  But most of all, we were sustained by the smell of the absorbent landscape—the earth saturated with that moist fragrance, the vegetation holding the water on its surface, glistening. 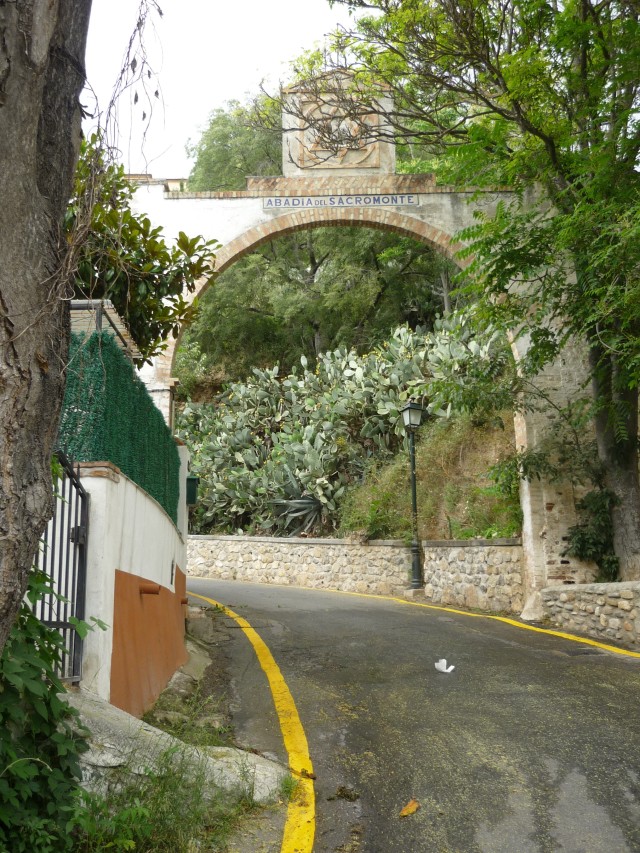 It was not fear that seized me for that instant though I may have expressed it in those terms. We’re alone, there’s no one around, just these two little women from Boston, speaking a foreign language, huddling against each other.  It was awe, and awe is always mixed with an undercurrent of terror as though at any moment invisible figures—the ghosts of the gypsies for whose “education” the abbey was originally constructed in the seventeenth century—would suddenly jump out in an ambush.  But it passed, that terror, leaving in its trail an unfamiliar but sweet sense of being gathered together, of being held, by the invisible hands and secret thread of the gods and their shadows, propelled by something aptly transcendent. 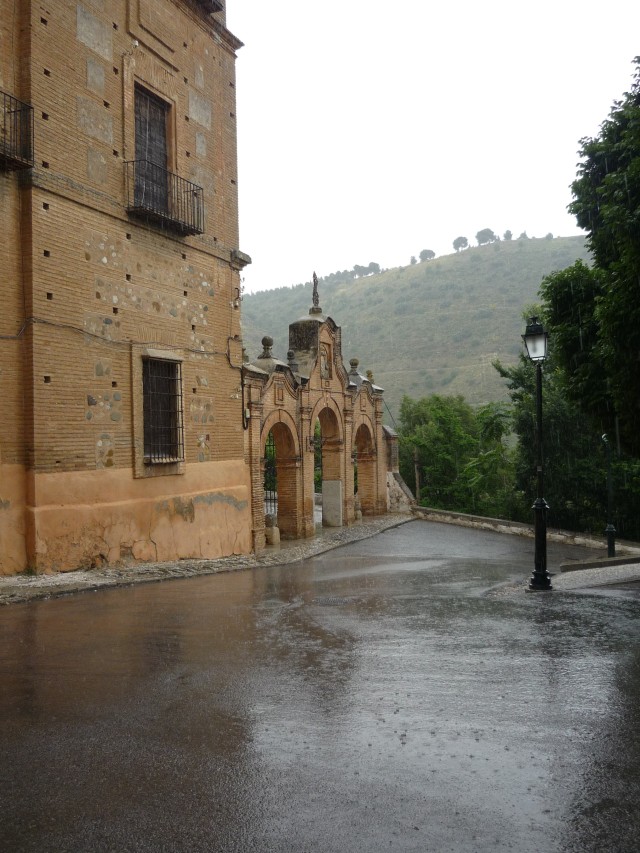 We made it to the top and into the abbey, which was completely devoid of sound and sight.  We sat in the foyer, looking out at the landscape ahead of us through the small iron gate.  In the distance the Alhambra extended across the entire top of the mountains, and here, in this spot, the Christian abbey built on the grottos of the gypsies—the quintessential moment of faiths in a violent embrace.

We sat for quite a while, looking ahead and inward, waiting for the rain to subside, which it did not. No sense of triumph, no sense of victory, but something else, like pure contentment at being here, in this place, at this moment.  Then, we decided to go down to the main road and find a way to get home.  We did not have the foggiest idea, except that we had heard that bus #35 passed from the main trail. 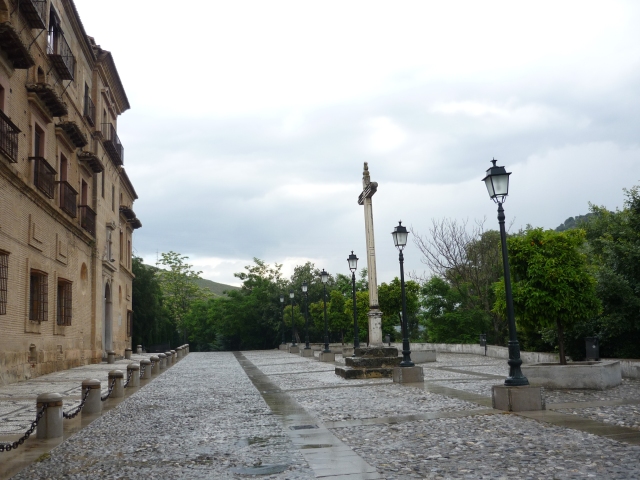 There are places in the world where you can go down on your knees—even if you are a card-carrying secularist—and rail and curse and bless and thank your gods.  Such places are removed from the push and pull of everyday life, from the noise and verbiage of human chatter.  You can go down on your knees and when you come up again, you are less vulnerable, more resilient, at least for a little while—and a bit less wet.

Camino du Sacromonte is such a place.  We made it back to the main trail, and within five minutes, bus #35 came speeding through the narrow street.  It was going in the opposite direction, up to the abbey, but the driver motioned to us to jump in.  Inside the bus, was a rowdy, laughing bunch of passengers whose noise turned wilder with each jolt and turn of the bus.  They all seemed to know each other, or acted that way which is more likely.  Before we made it to the top, the self-appointed “leader” of the gang asked if anyone was going to the abbey.  No one did, and so with a rather wild turn of the steering wheel our driver took a right downhill turn, which I thought would land the little bus at the base of theravine, on its side and throw us into an accident from which we would be delivered to the community of ghosts which inhabit these mountains.  But nothing of the sort happened though the swerve was pretty wild.

We made it back to the main trail and to the Albaicin.  No doubt the gods and the ghosts were on our side, all of them that roam these lands—the Christians, the Muslims, the Jews, the gypsies, the heathens, the believers.  Those who were burned at the stake, those who were expelled, and those conquerors who built their monuments on top of the destruction.

[All photos by Tamar Salibian]