From my files: Vahé Oshagan, Toward Life (Tebi Gyank)

Posted on August 9, 2011 by Taline Voskeritchian

Vahé Oshagan’s poem Դէպի Կեանք (Toward life) was completed in 1983 and published in 1991.  To my knowledge, the following is its first English language translation from the Armenian to be published separately anywhere. 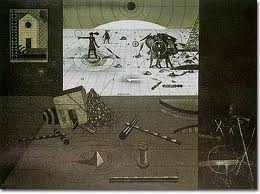 TOWARD LIFE
by
Vahé Oshagan

This midday too
god sits in death’s shade wipes the sweat off his forehead
takes out the round gold watch
looks
thousands cross-legged in circles listen to fairy tales
that swing from the tongues of tiny, suspended bells—
this is our life
dragging a torn fishing-net on our shoulder we walk the streets
the shrieking mob chases a decrepit whore ten months pregnant
liquid-eyed vagrant seven times over
for twenty-four hours we celebrate a single instant’s birthday
arms thrust in the wind fingers of nakedness opened
the longings throb incurably bit by bit—
oh this life
from the cradle they anointed us married us off in the stealth of darkness
we have now left home gone to the villages whoring with every passer-by
day and night hungry sleepless I’m out on the street I search
who is it? what is it? no one knows no one has seen
innumerable fetid wounds pave the world
I will bend down kiss
life is a street where the urchins have seized me chasing me, laughing at me
miniature holy desert I rent out to predators of human beings
and I flee stumbling through photocopy corridors:
How to live?
the invisible steel webs of wisdom cover the universe
caught in it I soar on the surface of consciousness
brand new useless furniture and housewares parade all day
isolated from the desolate living room we will stand face to face
look at each other to say what is already at the bottom of wind and water
fossils glitter in the pearly halls of the heart
seated on the ground I wait I’ve been jobless six months all the way back until there from where we did not yet start on the road all of us huddle nose to nose
no place left on the universe’s weathered sofa except to stand on one leg
cast a shadow in the morning and gather it at night.

And I live
in the pandemonium I have opened my palm begging from all four corners
whatever falls whoever steals in broad daylight
spreads it out carefully in the suburbs of loneliness without streets without sidewalks
but I sprout from the slits of desire bringing the light with me
to find the road before I’m lost traceless formless
caught in the sweet glue we wander how can we not love and hate each other?
the world and I are twins attached to each other on all sides
two bastards we lurk in the vicinity of the whorehouse
looking for our bashful mother
but everywhere the rustle of curtains the veil and patina of brides
thick dust of Vesuvius buried in it inside the horizon’s eyelid
leaning against each other we keep steadfast vigil for a miracle’s birth:

My life is the light
plastered wastefully on the eye of the world
poured freely for the famine-crazed wild multitudes
gigantic bribe for the hiding atoms to come out and look at me
perhaps we will recognize each other have something to say
at the exit of the same womb we too have crouched seated for centuries
our eyes on the empty white walls we smile like idiots
what business do we have in these parts?
for whose soul do these lamps burn?
what waste of luck this is which we barely managed to acquire
and arrived here spread the carpet on the grass took out the sandwiches and lay back
and already the guise of light covers us with the armors of dinosaurs
with insect feet we slide across the invisible hide of light
we have fun toast life strut around wearing shadows.

whom to tell the story how to tell it no one believes it anymore
that what happened was not an accident and the fairy tale has no end
a thrust cork floats on eternity’s surface and bottom
there was no escape when they lay the trap.

I will go toward life
to the stairs of the future there a duplicate standing naked
to the impossible appointment when is it where is it oh my god before they lock up the
coffee shop
to the sidewalks of midnight to wander a famished shadow
I am and I am not we will live in the multitude of the covered market
I sell memories . . .   I sell memories . . .  who will buy them . . . come take them . . .
I offer them for free
I am made of crumbs fallen to the ground around the potter’s chair
given shape in a hurry in the dark incomplete
placed at the center breathless to endure until I reach some place
the world poured all over the place  sand heap of an adventure-stricken truck
I sell memories . . . what do you care who I am what I am
I buy your torn underwear the smell of your mouth your shit
I am the only customer of your life you have locked the door inside what are you doing?
I am the sole heir of your treasures where have you buried them?
don’t you know that the desert begins beyond this point
the tortoise has fallen on its back the cripple has curled on himself
people each one a letter-bomb they explode in my hands as soon as I open them
the crumbs the echo fill the exotic bubble
which is carried across rooftops tumbles through the streets

that’s me that’s me
I have come before myself to herald my coming
the guest list in my hand to prepare the big feast
the last hope of the universe’s blind deacon of a firefly
may be this time for a second the narrow path will be visible
toward life.

Beyond its literary life, Oshagan’s poem has had an illustrious cohabitation with sound and film. In the mid-1980s, sound artist Ohannes Salibian, using a recording of Oshagan reading his own poem, created a text-sound composition which was performed at the University of California, Santa Cruz.  In 1995, film-maker Hrayr Anmahooni produced a new work titled (translated) Tebi Gyank, a 19-minute visual-aural re-shaping of the poem, which has been screened at several film festivals.