Posted on August 4, 2012 by Taline Voskeritchian 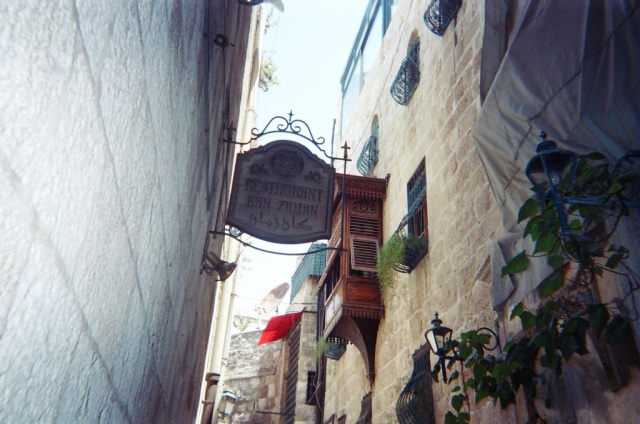 ~~Nothing ever prepares us for the fury and violence which befall cities, especially cities we have known as visitors and inhabitants; cities we have loved; cities that have given us back ourselves, changed; cities in which we have felt in the marrow of our bones the wretchedness of the human heart but also its soaring humanity.

Aleppo is one such city–layered, disorderly, seething, beautiful, but most of all magisterial, its inhabitants known for their legendary hospitality and generosity.  Aleppo, an open city, a city of welcome and fellowship, among its Christians and Muslims; its various religious sects; its natives and visitors.

Among the cities I have visited or lived in, Aleppo has a special place; no other city has left as indelible a mark on my consciousness as Aleppo for all the reasons mentioned above and more. For Aleppo is also the city of the Middle Eastern Armenian diaspora, before Beirut certainly.  An axis connects Aleppo to Paris, for these two cities were the first stations of the Armenian dispersion after the Ottoman genocide of its Armenian minority.  It is in Aleppo and Paris that the post-1915 Armenian exilic imagination took shape, as the refugees–traumatized, orphaned–began again, building churches, starting schools, bookstores, cultural centers, among them my father and his mother and aunt.

In Aleppo and Paris, writers began to write again in Western Armenian; a line stretches– taut and fragile– from  Sarafian in Paris to Dzarougian in Aleppo.  And it is in Aleppo that Hagop Oshagan, the pre-eminent prose writer of modern Western Armenian literature, (who is also my maternal grandfather) succumbed to a massive heart attack and died in 1948.  The following morning, he and  a group of friends and colleagues were to embark on a pilgrimage to desert of Der Zor, the killing fields of the Armenian refugees fleeing the genocidal machinery of the Ottomans.   His shrine is in Aleppo, the Aleppo Armenian community its custodians.

I have written about Aleppo in the present tense, hoping against hope, trying to use words as gauze over the wound.  It is folly, of course.  Aleppo is now a city of violence and disintegration; the Armenian community is by turns afraid, by turns courageous,  existentially dislodged again.

Pray for Aleppo and Aleppines, Christian and Muslim, Arab and Armenian and all the nationalities that have made Aleppo their home; weep for her and those who love her for all that she has given, for all that she has built and rebuilt, for all that she has held and kept in her narrow streets and public squares, in her dark rooms and verdant gardens, in her community centers and on her streets, in the mad frenzy of her energy which has now turned against itself.  A great city is crashing, leaving us diminished in its wake.  ~~