From Gezi Park:facing down the tyranny of “economic regeneration”

Posted on June 29, 2013 by Taline Voskeritchian

~~On June 16, Helin Anahit sent a folder of photographs by Murat Morova depicting the demonstrations and police crackdown in Gezi Park, Taksim Square and Harbiye.  Murat, a visual artist living in Istanbul, has given permission to post some of the photographs on this site, and Helin has written a short introduction. The latest reports indicate that “calm” has been restored to these areas although protests continue in Istanbul and throughout the country. Forums are being held in different locations giving new meaning and urgency to non-violent resistance.~~

Collective identity, historical archive, and cultural memory are among the primary tools for cultural regeneration in democratic states. In Turkey, since the Justice and Development Party’s (AKP) came to power, we have been observing regeneration through neo-liberal ways of boosting the country’s economy. This new wealth has brought along harsh methods of ‘demographic engineering.’ Then again, it has enhanced the texture of education and culture, creating increased levels of environmental and public consciousness among the ever-changing social landscape in Turkey, especially among the youth.

Recently, we have been witnessing a series of peaceful civil protests that began on May 28 at the heart of Istanbul, with the occupation of Gezi Park near Taksim Square and spreading to other cities. It should not come as a surprise that students who wanted to save one of the city’s very few remaining green spaces generated this movement. With a passion for the advancement of human rights, they transformed the space into an art festival site. This transformation was their dignified way of saying ‘Stop’ to Turkish prime minister Recep Tayyip Erdoğan’s autocratic leadership and the State’s maintenance of a homogenous, conformist, and controlled civil society.

This apolitical resistance that lasted for 18 days began as an environmental protest and turned into a nationwide anti-government movement. It was met with the violence and the brutality of the police force, which brought the occupation that rocked the country to a hasty end on the night of June 15along with the screams of the protestors who were left in haze of tear gas, plastic bullets, and water cannons.

As the movement has spread throughout the country with huge enthusiasm, it has exposed all the fundamental issues.  People are hoping for real democracy where they are not told when to drink, what to drink, how many children to have, even what docudramas to watch; for fair government, respect of human rights regardless of race, religion, gender, or ethnicity; and for press freedom. Despite the chaos and uncertainty of the aftermath–with 4 dead, approximately 8000 injured, and hundreds arrested–the country has not given up hope. It is waiting for the government’s next move.

The slogan on everyone’s lips is this: ‘Everywhere is Taksim, everywhere is Gezi Park, and everywhere is Resistance.’ On June 18, a new form of protest was sparked by people standing in solidarity and in silence. On June 22, thousands of people holding red carnations stood side by side in Taksim Square to show their respect for the dead. Their peaceful message was disrupted by the extreme hostility of the police force, following the orders of a prime minister determined to alienate himself from his public. People in Turkey are standing– with courage and hope for freedom. 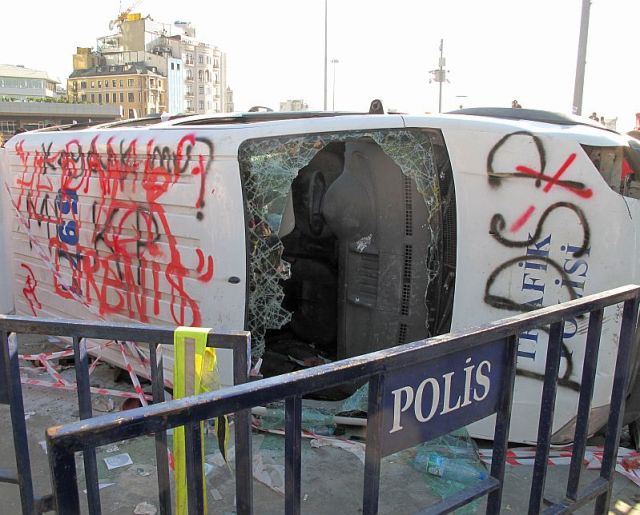