Posted on November 11, 2013 by Taline Voskeritchian

This afternoon, as the lights of the Paramount went on for the intermission of the last Boston performance of Samuel Beckett’s Waiting For Godot, the woman in the seat in front of me turned round and said, “I thought the play was over, such a great ending.”  She was right; it felt as though the thing had ended, if you did not know otherwise, or had forgotten that the play is in two acts. But it felt that way also because the Gare St Lazare Ireland production (in the capable hands of Judy Hegarty Lovett) had chosen to highlight, among other attributes of this foundational text of modern literature, the formal qualities of the play’s construction, its pace and its language, rather than creating any semblance of dramatic tension around the arrival (or lack of) of Godot, around his identity.  It also helped that there was no exaggeration of the wretchedness of the situation, of the  characters and the overall mood of the play. 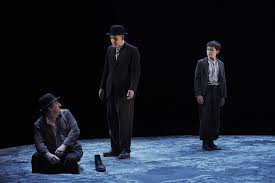 Godot is more than 60 years old, has been performed in innumerable languages, been adapted to diverse settings–civil war, occupation, imprisonment.  Our world, too, and our lives have changed to such a degree that the equation of Becket’s play–the waiting for that which will not come–is not that uncommon these days.  So, what better time than now to celebrate it as one of the greatest plays ever written, to pay tribute to its endurance by affirming its formal, expressive, and existential dimensions!  And what better troupe than an Irish one, based in Dublin, which has to its credit some 17 Beckett productions.

Ironically, the woman’s reaction is perhaps exactly what Becket, that most opaque of modern writers, himself was aiming for–that we watch the first act and realize that Godot is not going to come, and then watch the second act as a reprise, with eyes and ears emancipated from the tyranny of narrative, climax, resolution.   In this afternoon’s production, there was also an attempt to liberate Beckett’s text from the dominance, the lure of the technical –music, lighting, set design–keeping them all unobtrusive, restrained (there was no music), and in the end stunningly beautiful in the interplay of light, design, language and movement. 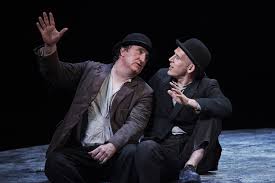 So, after the “rehearsal” of Beckett’s first act, what endured into the second act was the characters in space, the characters in speech– the characters waiting, filling the void with words and dialogue which, at times, veers toward vaudeville and at others toward ancient wisdom but never takes either too seriously or makes fun of the human predisposition to swim in platitudes.  In fact, what was most striking in this magnificent production was that Godot–his coming, his identity, his function but also his transcendent meaning–was far less important than Vladimir and Estragon (played superbly by Conor Lovett and Gary Lydon), as well as Lucky (Tadhg Murphy), Pozzo (Gavan O’Herlihy) and the Boy (Connor Thomas Upton).

Waiting is our condition, the production seemed to be saying.  We wait, and in waiting we crowd the air with words, with speech, with verbal stuff that is as funny as it is sorrowful, as bawdy as it is profound–but never vacuous.  In fact, this production was so attentive to language, to the inflections of Beckett’s English (he wrote the play originally in French, then translated it into English) that the whole afternoon was like a seamless cloth, a tender webbing of sound, punctuated by silences and by the laughter of the audience.

There’s a whole lot more to write about this rendition of Waiting for Godot, and others have done so. Suffice it to say that our ArtsEmerson is one of Boston’s most precious gifts to us all.  It  brings to us excellent productions from the world over, puts them on wonderful, relatively intimate stages, and generates audiences which are diverse, smart, and articulate–as was the woman who thought the show was over at intermission.  Beckett would have liked her!~~